DateDiff computes how many days there are between two dates, but I want to only consider working days. Is there an easy way to ignore Saturdays and Sundays?

There are a number of ways to calculate this, some more efficient than others. For instance, you can easily write a function that loops through each day in the range, only counting those that aren’t Saturday or Sunday.

The problem with code like this, though, is that it’s inefficient. It really isn’t necessary to look at every single date in the range. It’s easy to determine how many calendar days there are between two dates using the DateDiff function. You can also use the DateDiff function to determine how many weeks there are between the two dates. Since you want to eliminate two days per week, it should be simple arithmetic, shouldn’t it? You’d expect to use code like this:

Unfortunately, it isn’t that simple. There will be problems with that calculation if the start or end date is on a weekend.

Before I give the proper equation, I think it’s important to understand how DateDiff works to calculate weeks between two dates. There are actually two different arguments you can pass to DateDiff that will calculate weeks (“w”, for weekday and “ww”, for week). They work differently, but they both return the number of weeks between two dates–sort of.

If you use “w” as the interval parameter, DateDiff looks at what weekday DateFrom is, and counts the number of times that day occurs between DateFrom and DateTo. It includes DateFrom in the count, but not DateTo.

I think a visual aid may be in order. Take a look at Figure 1, which shows a calendar indicating what the days of the week are for the date range of 09 Sep, 2004 to 21 Sep, 2004. Ignoring DateFrom but including DateTo, there’s one Thursday in the range; two each of Friday, Saturday, Sunday, Monday, and Tuesday; and one Wednesday. 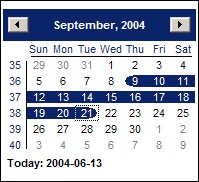 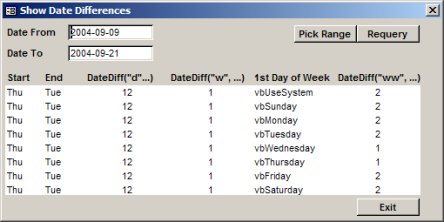 Since I want to eliminate Saturdays and Sundays from my calculations, I’m going to use DateDiff with the “ww” interval, with vbSunday as the first day of the week. DateDiff(“ww”, DateFrom, DateTo, vbSunday) counts how many times Sunday falls between the two dates, and I can work with that. (vbSunday is the default, but I’m going to be explicit, just in case the user’s preferences override the default.)

Armed with this information, I can create the following function that calculates the weekdays correctly:

In this code I’m using the actual values of the constants vbSaturday and vbSunday (7 and 1, respectively) in the function to save space (I’m limited as to how many characters of code I can show on a single line in this column!). What I’m really saying is DateDiff(“ww”, DateFrom, DateTo, vbSunday) and all of the Weekday comparisons are of the form Weekday(DateValue, vbSunday) = vbSaturday.

Some final comments: You don’t actually need to create a function; you can put that ugly expression in-line in your SQL query. If you do that, you must use the numbers, as I did here, since the Jet engine doesn’t know anything about the constants vbSunday and vbSaturday. Putting the expression in the query itself has the advantage that you can then use the query from outside of Access. For example, if you have a Visual Basic program, you can have the query defined in your MDB, but use the query from your VB program. If the query has a user-defined function in it, such as my WorkDayDiff function, you can’t do that.

Now I know how to eliminate weekends from my dates. What about holidays?

Unfortunately, holidays can’t be excluded in such a straightforward manner. First of all, there’s the fact that holidays differ from country to country (or even state to state or province to province). Then, some holidays fall on specific dates (for example, January 1), some holidays fall on specific days (such as First Monday in September), and some have weird and wonderful formulae for their calculation (for instance, Easter is the Sunday after the Paschal Full Moon, where the Paschal Full Moon may occur from March 21 through April 18, inclusive, so that Easter is somewhere between March 22 through April 25, inclusive).

I’ve always found that the easiest way to handle holidays is to create a table of holidays in your database (yes, this means you need to include some means of adding new holidays to your application). Once you have such a table, deducting the holidays from your calculation is as simple as determining how many holiday days occur within the range.

In other words, if you have a table Holidays, with primary key HolidayDate, you can figure out how many holiday days occur in your date range with this code:

To do the same thing in SQL, you’d use this query:

Incorporating this into my WorkDayDiff function would look like this:

Remember that if any dates in the Holidays table fall on a Saturday or Sunday, they’re going to get double-counted. You’d need to alter your DCount statement accordingly if that’s a concern, like this:

If you look in the accompanying database, you’ll see I’ve actually added another field to the Holidays table, Location, so that you can represent different holidays for different locations.

Okay, I now have a replacement for DateDiff to compensate for weekends and holidays. What about an equivalent to DateAdd?

That’s a little bit more difficult, but it’s not impossible. As before, I’ll start with the simpler case: only ignoring weekends. First, if the given start date falls on a weekend, then you want to start from the previous Friday. A little trick I use is to use the Weekday function, but with a FirstDayOfWeek value of Saturday. That means that Saturdays will return a value of 1, and Sundays will return a value of 2. If the Weekday is less than 3, you need to subtract the weekday value from the date (otherwise, add nothing to the date). The DateAdd function, combined with an IIf statement, lets you do this:

Then, since you’re trying to ignore two days every week, you can actually add a week to your start date for every five working days you’re trying to add. Fortunately, you can figure out the integer number of fives in a number using the \ operator:

Of course, you want to use the adjusted DateFrom from Step 1, so the code actually looks like this:

Now, assuming that the number of working days that you’re trying to add isn’t an exact multiple of five, there’s a remainder of days left to add. The “trick” is to determine whether adding those days will cross a weekend day. If, for example, you’re trying to add days to a Thursday, you know you can add one day and it won’t be a weekend, but if you need to add two days, you’ll end up with a Saturday, so you actually need to add four days to take you to Monday. Hopefully Table 1 illustrates the adjustment that’s required.

In Table 1, the column Max Days represents the maximum numbers of days you can add to the day without hitting a weekend day. The column Weekday(…, vbSaturday) shows the value returned by the Weekday function when you use Saturday as the FirstDayOfWeek. The formula 7 – Weekday(Date, vbSaturday) gives you the same value as Max Days. That means you need something like this code:

Recognizing that the remaining days can be calculated as NumberOfDays Mod 5, the final formula is:

As before, I used 7 rather than vbSaturday in the code in the interest of space.

To be honest, I haven’t found an easy way to include holidays in the calculation. Just as you need to adjust your starting day if it falls on a Saturday or Sunday, so too do you need to adjust it if the starting day falls on a holiday. Unfortunately, since you have no way of knowing how many days you need to adjust by (you could have two or three consecutive holiday days), that means that you can’t simply use DateAdd in your adjustment: You actually need to create a loop and continue subtracting days until you’re finally on a non-Weekend, non-Holiday day, like this:

Once you’ve arrived at a proper starting date, you can go through the same calculation as before. Once you’ve arrived at a tentative date-to, you need to check whether any holidays fall between one day after the original start date (you’ve already compensated if the start date itself was a holiday) and your tentative date-to. If there are any holidays within that range, you need to adjust the date-to accordingly. Unfortunately, you could be including yet another holiday when you do that, so you need to loop until no more holidays are found.

As you can see, that’s a rather difficult algorithm to explain, and it’s messy to implement. As a result, I’ve opted to use a variation of the crude approach I showed originally. Yes, it means you have to loop through all of the days, so the time it takes increases as the value for NumberOfDays increases, but it has the advantage of being understandable! Here’s the code:

Other Articles that May Be Of Interest

There is a follow up article on this topic by Doug here: Did Someone Say Holiday
About Time
When DateAdd Doesn’t