Doug Steele shows you how to add drag-and-drop to your Access application using combinations of multi-value and single-value controls. 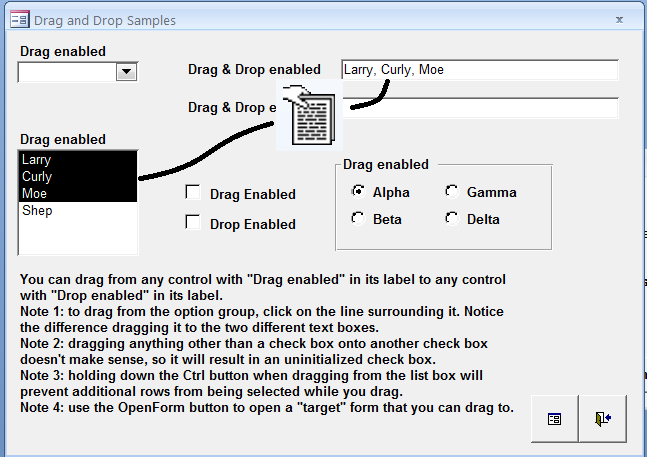 Just to be perfectly clear, I’m talking about dragging and dropping data, not the controls themselves. That means that some controls aren’t conducive to drag-and-drop. For example, you can’t drag a Command button or a Toggle button. As well, some controls are mutually incompatible for dragging and dropping. While you might be able to drag a check box, what would you expect to happen if you dropped it on a list box? On the other hand, if you dragged a check box to a text box, you might want the text box to display True or False, depending on the state of the check box when you dragged it. Rich-text boxes already support drag-and-drop, so I’m going to ignore them.

Dragging something requires that the mouse be depressed while dragging. This means that to be able to detect when a drag has started, you can use the MouseDown event for each control from which you want to be able to drag. Even if you’re not actually going to drag from the control when you activate the MouseDown event, there’s no problem with initializing whatever’s required, just in case.

The actual code you need to add to the MouseDown and MouseUp events of each control you want to be able to be dragged is pretty simple. When the MouseDown event occurs, you want to set global references to the control itself, and to the form on which the control exists, as well as set a flag to indicate that a Drag has started. I use three module-level variables:

One way of doing this is to have a DragStart routine, which can be called from the MouseDown event of every control from which you want to be able to drag. The routine looks like this:

You shouldn’t use Screen.ActiveForm in place of SourceForm because you may be dragging from a subform. It was a somewhat arbitrary decision on my part not to pass the active control as a parameter, based largely on the fact that passing the form meant less typing in each MouseDown event. If it makes you feel better, you can pass the control as well.

I like to take this technique one step further, though, since I consider it a good idea to give the user visual feedback by changing the mouse cursor to indicate that a drag is occurring. I use code similar to that at www.mvps.org/access/api/api0044.htm, although I name my functions SetMouseCursor and SetMouseCursorFromFile, rather than MouseCursor and PointM, so I won’t go into it here. I use a different icon depending on whether I’m dragging a single value or multiple ones, which means that I need to be able to detect which is the case. To do this, I add a fourth variable to what’s set in StartDrag: mbytDragQuantity (a flag to indicate whether I’m dragging a single value or multiple values). I then have a function SetDragCursor that uses that variable to determine which icon to use for the mouse cursor. Since the list box is the only standard Access control that supports multi-selection, the full code for StartDrag looks more like this:

If you’re using other controls that support multi-select, you’ll need to add additional cases in the TypeOf check.

To detect when the dragging stops, you need a StopDrag event that you can call from the MouseUp event of every control from which you want to be able to drag:

This code resets three variables: the mode (from DRAG_MODE to DROP_MODE), the drag quantity (from either SINGLE_VALUE or MULTI_VALUE to NO_MODE), and the mouse cursor. The code also sets a variable, msngDropTime, to the value of the built-in Timer function. This is important, since I use it in the next procedure to be called, DetectDrop.

Once you know that the dragging has stopped, you need to determine whether the drag ended on a control capable of accepting a drop. As soon as the MouseUp for the previous control has been handled, the MouseMove event of the new control will fire. That means that if you want a control to be capable of accepting a drop, you should be able to use the MouseMove event of that control to invoke the DetectDrop procedure:

The DetectDrop procedure is a bit more complex than the two others I’ve shown you so far. The first thing I do is check whether the event was called because a Drop has occurred. I do this by checking whether mbytCurrentMode has been set to DROP_MODE:

If this is a Drop, I then check to make sure that this invocation of DetectDrop was called by the MouseMove event that immediately followed the MouseUp event that invoked StopDrag. While I’m sure there are other ways of doing this, I find that comparing the results of the Timer function to the value of msngDropTime set by StopDrag works. If it’s not a match, I exit the routine:

If this is the appropriate invocation, I check that the control isn’t being dropped on itself (this is necessary for those controls that are set up for both dragging from and dropping to). I use the hWnd properties of the controls when comparing the two saved Form references. This lets me handle those situations where there are multiple instances of the same form open. It’s possible that the user might be trying to drag from a specific control on one instance of the form to the same control on another instance of the same form–which I want to support. As a result, I can’t just rely on the name of the form when doing this comparison:

Once I know that a drag-and-drop sequence has occurred, the last remaining thing to do is handle the drop. I do this with a routine called ProcessDrop that’s passed eight parameters:

As you’ve probably guessed, this can be the most complicated part, especially when you allow dragging from controls that support multi-selected values. As I alluded to earlier, you may have to make decisions about what controls can drag to which other controls, as well as decisions about what to do if you drag multi-selected values onto controls that are only capable of showing a single value.

The simplest form of the ProcessDrop routine is something like this:

In real life, though, the ProcessDrop routine is seldom that simple. If DragCtrl is a multi-select list box, for example, then as a bare minimum, you need to process each selected entry in that list box. And what if you’re dragging a multi-select list box to a single-value text box? One solution is to concatenate each of the selected entries from the list box into a single string value:

In this code, if DragCtrl is a list box with more than one row selected, I loop through all of the items in the ItemsSelected collection of that list box, concatenating each value to a string, and then assign the value of that string to the DropCtrl. If the bound column of the list box isn’t the value you want to display, you’ll have to change the line value DragCtrl.ItemData(varCurrItem) to something more appropriate, such as DragCtrl.Column(2, varCurrItem).

If DropCtrl is another list box, maybe what you want to do is copy (or move) the selected items from the source list box to the target list box. How you do this, of course, depends on how you populated the list boxes. The sample database in the accompanying Download has an example where I demonstrate how to drag from one list box to another. In this case, the two list boxes are based on a table that has a Selected field in it. One list box represents those records in the table for which the Selected field is False, while the other list box represents those records for which the Selected field is True. This means that ListBoxExample (which I call from ProcessDrop) must be able to update the table and requery both list boxes:

You may have noticed that in this case I’m using one of the other values passed to the routine from the MouseMove event–specifically, the Shift value. This allows me to add the feature that if you drag from one box to the other while holding down the Shift key, all of the records are dragged, not simply the one(s) you’ve actually selected. (It also allows me to justify why I’m passing those values from the MouseMove event to the DetectDrop routine, and then to the ProcessDrop routine.) I check whether or not the Shift key is depressed with this code:

The expression will be non-zero if the Shift key is depressed when the mouse is dragged. If it was depressed, I don’t bother with a WHERE clause in my SQL statement; I simply change all of the Selected values to either True or False. If the Shift key isn’t depressed, I loop through the list of all selected rows in the list box (using the list box’s ItemsSelected collection) and add each one to the WHERE clause.

Now that I’ve updated the table appropriately, I requery the two list box controls, so that their content reflects the updated table.

Other dragged controls will require still different handling, and how you handle each dragged control may depend on what the drop control is. For example, if you want to be able to drag check boxes to text boxes, presumably what you’d want to appear in the text box is “True” or “False”. On the other hand, if you drag a check box onto another check box, you’d probably want the drop check box to take on the same value as the dragged one. You can do that with code like this, which assumes that you’re supporting dropping check boxes on either text boxes or other check boxes:

I’ll give one more example: Suppose you want to support dragging an OptionGroup on your form onto a text box. The OptionGroup will have a numeric value associated with it that identifies the control that the user has selected. You could either drag that numeric value to a text box, or determine the text associated with the selected control and drag that text. In your code in ProcessDrop, you’d have to specifically determine which text box is to get just the number and which is to get the text, using code similar to this:

Hopefully, you’ll be able to take these various building blocks and combine them into a module that will meet your specific needs.