Objects for the Database Developer

If you’ve ever felt that object-oriented development is something that Access developers just don’t do–well, you’re wrong. As Peter Vogel points out, Access developers are uniquely qualified to design objects: They have the attitude and they’re already writing the necessary code.

That doesn’t mean the typical Access developer isn’t going to want to create the odd object. Many developers have combined various utility functions into class modules that they can copy from one project to another. The best-known examples are the many useful routines delivered as part of the Access Developer’s Handbook (by Paul Litwn, Ken Getz, and Mike Gunderloy). However, it’s only a matter of time before you’ll need to get more involved with objects. Here at Smart Access, for instance, we have at least one article in the pipeline that’s going to depend on your ability to integrate objects into your applications. It’s also entirely possible that, like developers in other environments, you won’t want to access a remote database through linked tables but will want to use ADO code embedded within a class module.

More good news: If you’ve been building your applications using functions and subroutines, then you know everything you need to know to create a method in an object. As you’ll see throughout this article, there’s no code that you’ll use in creating an object that you haven’t written over and over again in creating Access applications. In fact, because of your experience in working with recordsets you have another advantage in creating objects over non-Access developers: years of experience in working with structures for holding data.

Let me prove it to you: Assume that you’re going to be extracting sales order data from a remote database. The database has an Orders table with order header information, an OrderDetails table, and several lookup tables for decoding codes in the other tables.

If you were retrieving data from the Orders table in an Access application, you might write a subroutine or a function to retrieve a single row from that table. Assuming that you’re not going to use a stored procedure, the ADO code to retrieve the data would look like this (I could have used DAO just as easily, but I’m more comfortable with ADO):

In this example, I’ve set the recordset to use a client-side cursor causing ADO to retrieve all the data into the recordset object as soon as I call the Open method. I’ve also set the LockOption to use batch optimistic locking, which prevents updates made to the recordset from being sent back to the database. The combination of these two options effectively eliminates the need to remain connected to the database, creating a “disconnected recordset.” As a result, I can break my connection to the database after retrieving the data by closing the ActiveConnection. Now it’s just a matter of adding this code to a Class module (which I’ll call the SalesOrder class).

Which raises the question: Where in the object would you put this code? When you work with an object, you execute its code through two mechanisms: by calling a method or by setting/reading a property. Traditionally, a method has a name that includes a verb so if this code goes into a method, the method should be something like GetSalesOrders (I like long method names). However, it makes more sense–in my opinion–to put the code inside a property.

How do you decide? This isn’t a technical question–it’s a design decision. The question that you need to ask yourself is whether developers should use your object like this:

As you’re making up your mind, there’s one more thing to consider: You’ll need to provide a way for developers using your object to get at the data in the SalesOrders row. For that, you’ll almost certainly want to use properties that allow developers to read and change the values of the fields. This means that you’ll want to have a property that allows developers to retrieve the OrderId field. That being the case, it makes sense to use that OrderId property to retrieve the row.

If you decide that you prefer the method-based approach, you’ll write a method to retrieve the data and then write a property to support developers’ retrieving the OrderId field. You create that property by writing a Property Get routine. When someone reads a property, your Property Get routine–which looks just like a function–will be run. The result would be this code:

In this article, you’ll see my preference: I’ve used the property-based version in all of the following examples.

Now it’s just a matter of writing more Property Let and Get routines for the other fields in the row:

Here’s where the Access developer’s mindset becomes useful. In an Access form, you wouldn’t display just the CustomerId on the form. Instead, you’d retrieve enough customer information to be useful to the user (for example, the full customer name). When building an object, you’d do the same: You wouldn’t just return the customer id, you’d return something useful. In this situation, it makes sense to return a complete Customer object. In other words, someone using your object would be able to write code like this:

Implementing this is easy to do. First, of course, you have to create a customer class whose code would look very much like the SalesOrder object:

You don’t, however, write a corresponding Property Let. When someone sets a property to an object, they expect to use a Set command. In other words, the code to pass a Customer object to your Customer property would look like this:

If you were building a sales order form, you’d probably display the Orders information at the top of the form and a continuous form of OrderDetail rows at the bottom. Your SalesOrder object should do the same but, in object development terms, the continuous form is represented by a collection. You actually have two ways to create the collection. Both build on something that an Access developer knows all about: working with recordsets.

The version that I’ll show you first is the simplest to understand. The key value of this method is that it doesn’t consume much in the way of memory (the second method that I’ll show you will use more memory). However, this method won’t support some key features that developers expect to find in a collection.

With whichever method you choose, the developer using your object will be able to pass a product id to the OrderDetails property and get back an OrderDetail object:

However, if you wanted to be really efficient, you’d do two things differently:

If you decide to implement this strategy, then you won’t bother to retrieve the order details until the OrderDetails property is actually read. If the recordset holding the details doesn’t exist, you create it. With that strategy in place, the start of the OrderDetails Property Get routine would look like this:

Before moving on to the next step in building a complete collection, let me stop and look at the OrderDetail object. As the previous code shows, the OrderDetail object requires two values to specify how it’s to be created: OrderId and ProductId. In my example, I used two properties to accept those values. The OrderId property code just updates a module-level variable:

You may already be thinking that this is a very complicated way of doing things. I actually create an opportunity for developers using my code to create problems: If a developer sets the ProductId property before setting the OrderId property, then the code will generate an error.

For this object, it might make more sense to have a GetOrderDetail method that accepts both an order id and a product id:

What you should notice about this discussion is that it’s not a technical discussion–it’s a design discussion. You’re free to implement your object any way that you want.

However, there are some important features of accessing a collection that this very efficient but simplified mechanism omits. For instance, there’s no Count property available through this implementation. Furthermore, developers won’t be able to use a For Each…Next loop to work through all the OrderDetail objects. This example, which loops through the OrderDetails collection of a SalesOrder object, adding each OrderId to a ListBox, isn’t possible with the highly efficient implementation already described:

To support a For Each…Next loop, you need to create a separate OrderDetails (notice the “s”) object that handles the collection of OrderDetail rows. The OrderDetails property on the SalesOrder object will now return this OrderDetails object:

So what does the OrderDetails object look like? To begin with, it has an OrderId property very much like what you’ve seen before to retrieve all the order detail rows:

As I said, this version of managing the order detail rows is less efficient than the previous implementation. That’s because the next step in the OrderId property is to loop through all of the order detail rows, creating an OrderDetail object for each row and storing those objects in a collection. This will consume more memory than just holding the data in a recordset. However, this method will let developers use a For Each…Next loop with your object.

Here’s the code that, as each OrderDetail object is created, adds the object to a Collection object called colDetails declared at the top of the class:

But what about that For Each…Next loop? In order to support using a For Each…Next loop with your object, you need to write a function that returns IUnknown (by convention, this routine is called NewEnum). In this function, you just need to return the _NewEnum member that’s built into the Collection object that holds the OrderDetail objects. Since the _NewEnum member’s name begins with an underscore, the name must be enclosed in square brackets:

Here’s where things get ugly. In order for VBA to find this routine when processing the For Each…Next loop, the routine must be assigned a UserMemId attribute of -4. Unfortunately, the only way to assign this value to the routine is to go through these five steps: 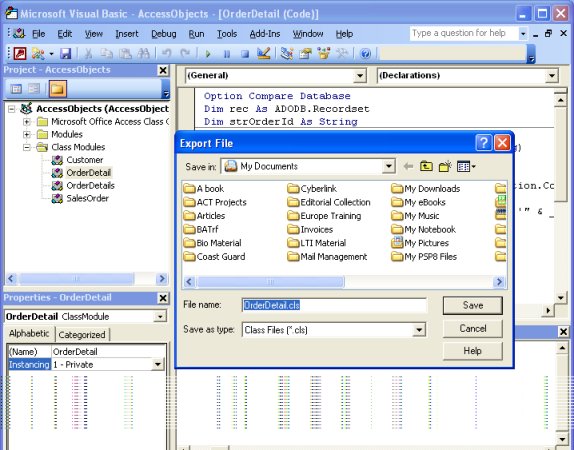 The good news here is that you don’t need to do this more than once–VBA will maintain the attribute setting as you modify and recompile your class.

You have three options:

Generally speaking, I prefer the third option. Here, along with the method that supports deleting SalesOrder data, is my typical Update method:

In the sample database method in the accompanying download, I’ve included the bare-bones of the four objects (SalesOrder, Customer, OrderDetail, and OrderDetails) that I’ve discussed in this article. I’m sure you realize that all of these routines will require some error handling code. But looking at my simplified code should help you realize that, as an Access developer, you have all the skills to become an object developer.

After 10 years of editing Smart Access, Peter continues to develop with Access (though he also does a lot of .NET stuff). Peter is also still editing other people's article--he even self-published a book on writing user manuals ("rtfm*") with a blog here.
View all posts by Peter Vogel →
This entry was posted in Old Material. Bookmark the permalink.
Click here to cancel reply.