By using the WithEvents keyword, you can extend the possibilities of Access’s classes. Marek presents new ideas on programming in Access.

In this article, I’m going to provide some simple examples of the first three areas. I’m going to start with a simple example that shows how you can create a reusable class module that responds to a form’s events. The first step is to insert a new class module (which I’ve called cTextBox in this example) into an Access 97 database and then add the following code:

The objects that are created from this Class module will respond to the Exit event of any TextBox control, in any form in your database. To use the object, you’d create a form with two TextBox controls — I’ll call them txtText1 and txtText2. What I’ll do now is have the routines in the cTextBox class intercept the events fired by these two text boxes. To do that, I have to add some code to the class to accept a reference to a text box. That code looks like this:

This routine will define a property that accepts a TextBox control. The property is called Control, and it sets the mTextBox variable to point to the TextBox passed to the routine. I can now use the cTextBox object in my form as follows:

What does this mean? It means that, with the WithEvents keyword, it’s possible to create Class modules that contain standard code for working with form controls and reuse them in different Access projects. You can even place these Class modules in a library database so that the code can be reused without having to cut and paste the Class modules from project to project.

The preceding example is very simple, but it can be extended easily. I’ll add this code to my cTextBox object:

With this code, I’ve created a property called Length for my object. The Length property is used to set the value of the intLength variable. I also have a KeyPress event that fires every time the user presses a key in the text box. The code in the KeyPress text box checks the length of the Text property in the form and sees whether it exceeds the length specified in the intLength variable. If it does, the event sounds a beep and exits the routine after setting the KeyAscii parameter to 0. Setting the KeyAscii parameter to 0 causes the last keypress to be discarded.

Put it all together and my cTextBox object allows me to specify a maximum length for the text entered into my text boxes. Should the user try to type more characters, he or she will get a warning beep and be prevented from doing so. The only change I have to make in my form is to set the new Length property of the cTextBox object:

For my next example, I’m going to create an object that captures the events fired by a form. I’ll begin by saving the following code as a class module called cFormListener:

This object has a BindForm method that accepts a Form object variable. The cFormListener object’s frm variable is then set to the Form that’s passed to this method. As a result, the frm_Activate and frm_Resize routines will now execute when the Form passed to the BindForm method fires its Activate or Resize events.

To test the cFormListener object, I’ll create a form with its BorderStyle property set to Sizable and put the following code in it:

This time I used the Form_Open event to create a cFormListener object and then bind the Form to the object using my BindForm method. Now when I try to resize the form, I’ll get the message boxes that show that the cFormListener is responding to my form. I could use this technique to create a reusable Class that would be able to resize any form. To tie the object to the form, I’d need only two lines of code (one of which is the declaration of a variable).

For my final example, I’m going to create an object that automatically passes information from one control to another. The cTwoObject object allows you to bind one control to another. I’m going to begin this example with the form that uses the object (see Figure 1). The form consists of one command button (called cmdTest1) and one option group with two option buttons (called fraOption1). The form’s code module contains the following code: 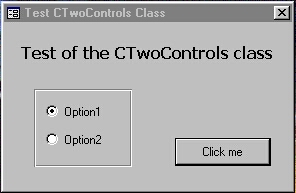 Listing 1. The code for the cTwoObjects object.

The ValidateControls routine checks to make sure that the references to the Command and Option buttons have been set. If the relevant object variables aren’t set, ValidateControls exits with an error code.

The WithEvents keyword gives you power that you never had before. You can move basic functionality from forms into classes and share those classes among Access projects. It’s also possible to mix the functionality of two different classes, creating a kind of simple inheritance.

As a bonus, the sample database that comes with this article is set up so that all the classes in it are available to other Access databases (it’s available in the accompanying Download file). If you add a reference in your Access database to my sample database, you’ll be able to use all the classes defined in it, just as if they were defined directly in your project. The simple trick to expose classes from library databases to other Access projects is described on the ATTAC Consulting Group Web server at http://ourworld.compuserve.com/homepages/attac-cg/acgsoft.htm.

[Next month, in another article on WithEvents programming, Shamil Salakhetdinov will present some techniques that build on this foundation to dynamically attach events to controls in Access without adding any code to the corresponding forms. — Ed.]

Marek Kepinski works as a technical consultant at Impaq Technology Center, a Microsoft Solution Provider based in Warsaw, Poland. He’s currently working on a major database project for a Swiss bank. MKepinski@Impaq.com.pl.

The WithEvents keyword can also be used to communicate between Access and other Microsoft products. As an example, you can use this code to not only gain control of Excel but also to respond to events fired by Excel:

Excel fires a number of events, which I’ve listed below, that you can respond to from within your Access Basic modules. These events are as follows:

Class modules in Access allow you to define objects by writing VBA code. In a Class module, subroutines and functions appear as methods of the object defined by the Class module. Property Lets, Gets, and Sets allow you to create properties for your objects.

The techniques presented in this article can be used not only in Access, but in all the other Microsoft applications that support Visual Basic for Applications. The version of VBA that’s used by Access 97 contains some new Visual Basic keywords, which can’t be used as identifiers (these include AddressOf, Assert, Decimal, DefDec, Enum, Event, Friend, Implements, RaiseEvent, and WithEvents). If you try to use these keywords in your code, you’ll get a compile error — that is, except for the WithEvents keyword, which can be used in Access 97.

The WithEvents keyword is used as follows:

The following code defines the object variable obj that points at the object Fred. The object Fred fires an event called Alert. To create an event procedure that would run when the Fred object fires the Alert event, you’d write this code:

To get more information on WithEvents, see the “ItemAdded Event” topic in the Access Help file (References collection).