You Can Do That with Datasheets?

Everyone who uses datasheets knows they’re powerful, but very few people know all of the things you can do with them. Michael Kaplan pulls out a handful of tricks from the unlocked Access 97 wizards that can help you really get the best of these useful items.

One of the things that even the most diehard Visual Basic developer admits is that they wish that Visual Basic had a grid as powerful as Access’s datasheet. And with all of that power, there are still many things that no one knows how to do with them. Datasheets are routinely dismissed by developers, who seem to favor continuous forms.

However, datasheets provide a simple yet powerful way to display data to your users. Datasheets also allow you to provide a user interface (UI) that your users can configure to meet their needs. Most developers feel that datasheets give too much control to their users. However, by taking control of your datasheets, you can incorporate them into your applications. In this article, I’ll show some of the features of these powerful UI objects that most developers don’t understand.

Datasheets have a lot of properties meant only for them, which are listed in Table 1.

With the exception of the Subdatasheet properties, you have no direct design-time access to these properties: None of these properties show up in the datasheet’s property sheet. As a result, they can only be set at runtime from VBA code in order to make changes. Interestingly, none of the properties are exposed by ADO or ADOX, so if you want to change them, you’ll have to use DAO.

While you can’t access these properties through property sheets, many of them can be set in the user interface. They are, for example, what’s changed when you set the font of a datasheet from the Format menu. For full control over the datasheet, though, you’ll want to explicitly set the properties in code and save the object when you’re done.

It’s worth noting that a datasheet is a form—it says so right in the object browser. The object browser considers the datasheet’s columns to be the controls on the form. As a result, a datasheet can consist of any control that can be displayed, which means all TextBox, ComboBox, and CheckBox controls.

Okay, enough introduction; I want to show you some of the cool things you can do with datasheets. Obviously, many of the datasheet properties need no explanation: Anyone can tell what a font or a grid property does. Instead, I’ll move to less obvious items of interest…

Sometimes, you want to hide specific columns in a datasheet. For example, the Access ListBox/ComboBox Wizard does this. The wizard uses a generic, 20-column datasheet as part of its user interface. The wizard hides specific columns to limit its display to the number of columns appropriate to the sample data. Even if your needs aren’t quite so grandiose, you might want to hide all but the relevant columns on every display. You might even want to provide a bunch of CheckBoxes at the top of the datasheet to allow your users to hide and show columns. I personally find that kind of user-configurable UI really interesting.

To see this in action, you can check out frmHideShowColumns and sfrmHideShowColumns in the sample database in the accompanying Download file. The subform is just a simple datasheet based on the Products table from Northwind, while the form is unbound and contains check boxes to show and hide the various columns on the subform. The frmHideShowColumns form looks like Figure 1. 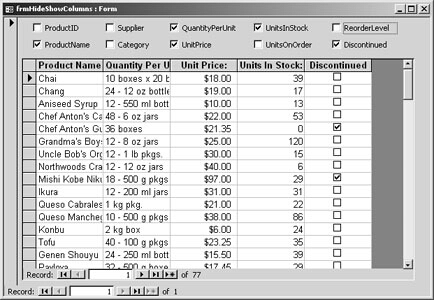 In truth, most of the work in this form was just in naming all of the controls consistently (I used “ck” as a prefix for every check box on the main form, “tb” as a prefix for every text box on the subform, and the actual field name for the rest of the bound controls on both the form and subform). Once the appropriate names were in place, there were just two steps left: 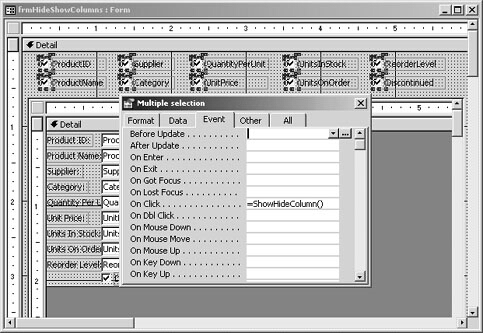 The code to show and hide the columns is in a routine called ShowHideColumn. You’ll notice that it looks a lot like the code in the Form_Load event:

Voilà! You can now show and hide columns on demand!

You can certainly expand this technique. Here are some suggested ways to enhance the functionality:

Believe it or not, once users start realizing that they can reconfigure their UI, they can’t get enough of it. Many users know that they can just stick the mouse at the header of the column, click to select, and drag the column around. Easy! But this can be very annoying if the result isn’t appropriate for the applications—especially if they save those changes!

The problem is that sometimes you want to make sure that your users can’t make dramatic changes to the layout of your datasheet. For instance, you might need to make sure that some data is always visible. Unfortunately, there’s no property to fix a column in position. However, you can use the events associated with controls to get the same effect.

To control repositioning, you need to use the MouseUp event of the controls in the datasheet. Set the properties for all of the columns to a single procedure in the same way I described in the previous section (and as shown in Figure 2), and then use the following procedure to keep the columns from wandering:

You can obviously do a lot more with the ColumnOrder property. This example always reorders them back the original order, whereas you might actually want to move your columns to a new position. In fact, you can combine ColumnOrder and ColumnHidden to produce all kinds of complicated schemes that allow you to reuse the same subform across several forms. All you have to do is use these properties to change the emphasis to particular fields in the datasheet. My one piece of advice is to make sure your changes are intuitive. It can be very unsettling for users to have things move around on the fly. You should usually restrict these techniques to changing your layout on load of the form and then leaving the UI alone.

Now, the advanced developer who’s had to deal with this problem before knows that there’s one case that isn’t handled by this sort of code. If the user chooses “Freeze Column” from the Format menu, the selected column is moved all the way to the left-hand side of the screen and fixed there, no matter how you move around the datasheet (much like Excel’s column freezing capabilities). You can detect this situation by looking at the FrozenColumns property, which indicates how many columns are frozen (it will always start with 1, because Access counts the record selector as a column that’s always frozen). If you want to freeze or unfreeze columns from your code, you can use DoCmd.RunCommand, passing acCmdFreezeColumn and acCmdUnfreezeAllColumns as the parameters.

What’s missing from this functionality is an event that informs you that the user has frozen some columns, and also a property on each column that tells you which columns have been frozen. If you want to control which columns are frozen, you’ll have to check the FrozenColumns property to see whether the number is wrong, unfreeze all of the columns, and then freeze the ones that you want.

The ability to resize columns programatically to display the data currently in the column is the original reason I wanted to write this article: It’s just an amazing feature. The first place I ever saw it was in Access’s Normalizer, better known as the Access Table Analyzer (the names of all of the wizard’s objects are still prefixed with “NORM_” because the marketing change to “Table Analyzer” didn’t force any code changes!). The Normalizer creates a query using DAO, and then it sets the columns of the resulting datasheet to be the appropriate width to display the data in the columns. And remember, tables and queries in Access are displayed using datasheets (at least, when you have them in browse view), which are forms.

The trick to resizing columns automatically to the data currently in them requires two steps:

You can simply pass the name of any table or query to these routines and let them do the rest!

If you need to do the same task with a Form, it’s even easier: Just set all of the ColumnWidth properties to -2. No extra steps are needed.

Really, this article only touched the surface of datasheets. Looking toward Access 2000, there are new features that can be used for datasheets:

It’s clear that datasheets have some real power behind them, in terms of how they can be used by your customers and how they can be manipulated by you. You might find one or more of these tips useful, and even be inspired to find other useful features from datasheets in Access!

And The Good News Is

Michael Kaplan was the owner and lead developer of Trigeminal Software, Inc., a consulting firm that focuses on all types of unusual interconnectivity solutions in Microsoft Access, SQL Server, Visual Basic, and Office. He worked for Microsoft till 2015. Unfortunately he died in 2015 :(
View all posts by Michael Kaplan →
This entry was posted in Forms. Bookmark the permalink.
Click here to cancel reply.