This month, Doug Steele looks at a common problem in database design: converting from one data classification schema to another. He then moves on to a related question: ensuring that there are no overlapping records in a list of ranges (for example, a list of scheduled events). This results in some thorny SQL, but the results can be used in a wide variety of circumstances.

I’ve got a database with student marks, and I want to convert the numeric marks to letter grades.

I’m going to start by looking at your specific problem, but by the end of the discussion you’ll see how this problem applies to other scenarios as well. For example, if you’ve got a table of date ranges, you may have occasion to assign a specific date to a particular group (for instance, does this date fall within our study period/sales period) or specify whether a particular value falls into a specific category (for example, does this tire’s pressure indicate that the tire is underinflated/overinflated/borderline/okay). Your question really reflects a universal problem: “How do I classify specific data values reliably and reduce a mass of data to key pieces of information?” Converting specific test marks into the categories defined by letter grades is a great example because there are so many categories–most of the times that you have to deal with this problem you’ll have only three or four categories.

The normal approach to classifying data is to create a second table that indicates the numeric range for each letter grade, and then join the two tables in some way. However, there are some potential gotchas with this approach, so I’ll go into more detail.

I don’t like the second approach, as it can lead to gaps in the calculation. If a B is 70-84 and an A is 85-100, what mark does someone with a score of 84.5 receive? I’m a believer in the first approach I mentioned, with attention paid to the inequalities used when joining the tables to ensure that no overlap occurs. 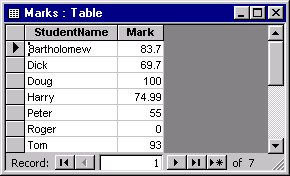 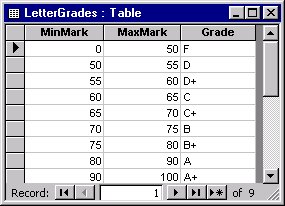 A common approach is to use a query like this:

The first problem you might encounter is that you can’t create queries like this in the Query Design view. You must go into the SQL view and type in the query. The real problem with this query, though, is that the Between operator is inclusive. Peter’s mark of 55 happens to be both a MaxMark in one row and a MinMark in another row, so his row will be joined to two different rows in the LetterGrades table, and he’ll show as having both a D and a D+ (see the upper left-hand chart in Figure 3). 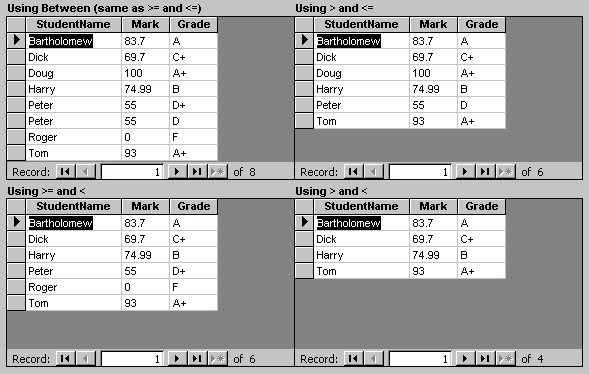 Unfortunately, simply changing the query to use more explicit inequalities doesn’t solve the problem. This query won’t work any better:

As the upper right-hand chart in Figure 3 shows, when I use “ON Mark > MinMark AND Mark <= MaxMark”, I miss assigning a grade for Roger, since his mark of 0 doesn’t match anything. Furthermore, Peter only gets a D for his 55, when I think he should get a D+.

So what’s the answer? It turns out that I don’t really need to worry about MaxMark at all. I can determine which row in the LetterGrades table is closest to the mark (without exceeding it) using a comparison like this:

This doesn’t give me the LetterGrade that’s in the same record as that mark, but I can get that by using a correlated subquery:

This query isn’t complete yet, so don’t use it until you’ve read the next section. The query now returns the grade for the row that has the right mark. My original comparison query has now become a subquery that finds the right mark and returns that mark so that it can be used to find the right grade. I suspect that performance would be slow if the classification table were large. However, most classification tables are quite small (even my marks table has only about a dozen entries) and will process very quickly.

Since I also need to know the student name, I now create the following query that ties the query that selects the grades together with the list of students and their marks (I’ve numbered the lines for reference):

While I apologize for the complexity of this query, it does return the correct values, as shown in Figure 4. My previous query now appears in lines 2-6, where it supplies the Grade field to what I’ll call the “main” query. The main query consist of lines 1, 2, and 7. Lines 1 and 2 select the student name, mark, and grade from the table called Marks (as specified in line 7). Of course, the Marks table doesn’t include the LetterGrade, so that field is retrieved using my previous query (the “inside” query). 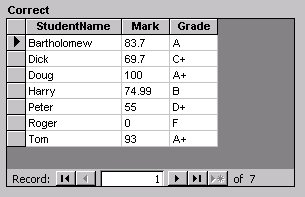 Also in line 7, I assign an alias (“M”) to the Marks table. As you can see, that alias is used in line 6 to specify where to get the Mark to be used in the inside query. As the main query processes the Marks table, as each Mark is retrieved, that Mark is fed to the inside query and used to control which row is selected from the LetterGrades table. The results of that query are used to select the row with the right grade, and that’s fed back to my main query.

Now that I’ve got a query to return the letter grades, how can I be sure that my LetterGrades table is correct?

Again, while I’ll start with your marking problem, I’ll finish by showing how to solve this problem more generally (you might need to check whether any dates in a table of date ranges overlap, for instance). As you saw, you don’t need the maximum mark at all to handle the classification problem. However, if you were maintaining a list of events that begin and end on specific dates, you’d want to make sure that no two events overlapped. Here, you do need both a minimum and a maximum date (probably called “StartDate” and “EndDate”). I’ll use the grade scenario to work through the problem and then switch to looking at dates.

Now I need to decide what constitutes a problem. While you could think in terms of “There’s a problem if MinMark in G1 is less than MinMark in G2, but only if MaxMark in G1 is greater than MinMark in G2” and so on, it turns out that it’s easier to think in terms of what’s not a problem than what is a problem: For every row in the table, MinMark has to be less than MaxMark. In that case, a given row from G1 doesn’t conflict with a given row from G2 if either of the following is true:

Since I’m comparing rows in the same table with each other, I’ve joined every row to the copy of itself from the other instance of the table. So an additional test that I need to consider is when the row from G2 is the row in G1. As it turns out, that’s not a problem either. I can check all three conditions with this test (the last three lines check that the two rows are identical):

You could probably simplify this test by just checking that “G1.Grade = G2.Grade”, but that assumes that each row has some unique identifier that you could test this way.

Remember that the preceding expression will return True if there’s no conflict. Since I only want rows where there is a problem, my final test query looks something like this:

Now, I’ll admit this isn’t the prettiest output, and I’m sure there’s probably a query that might present the information in a friendlier way. What this query returns is a list of rows that overlap, but it doesn’t actually highlight which row needs to be fixed. 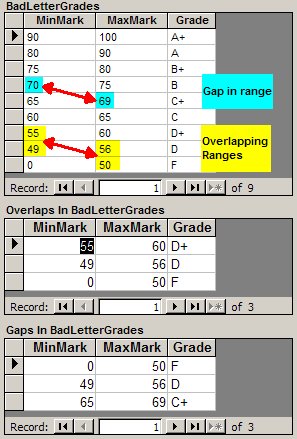 It’s also possible to expand on the techniques I showed in the Apr-2004 “Access Answers” column to check whether there are gaps in the ranges provided in the table. Earlier, I used this SQL:

Since the value of MinMark should equal the value of MaxMark for the previous row, I should be able to use the preceding calculation to determine whether that’s the case using another correlated subquery:

How can I extend this overlap-checking to clashing events or appointments?

A more common situation where you need to worry about checking for clashes is in scheduling applications. You might have a table along the lines of what’s shown in Table 1.

Such a table could be used for meetings, sporting events, or classroom scheduling.

As before, it’s easier to think in terms of when an event doesn’t clash, rather than when it does. Two events don’t clash if any of the following is true:

Again, these four conditions can be checked with a test like the one that I used for grades:

I want to go one step further this time, though. Assume that it’s possible an Event may have been added to the table without knowing the Start and/or the End and/or the Location. In this case, it’s not possible to know whether or not an event clashes with another event, so I’ll want to flag it as a possible problem that requires follow-up.

What I want to do now is identify problems, which appear if the condition is False or Null. I could use this SQL:

However, this involves doing all of the calculations twice. If the Event tables are large, this can lead to hundreds (or worse!) of unnecessary calculations. Since there’s no Join operator in my SQL statement, the resultant recordset is going to be a Cartesian product. If there are 500 records in table Event, the resultant Cartesian product will contain 25,000 rows. The computations will thus be done 50,000 times, even if there are no conflicts in the table. That’s 25,000 extra computations.

Rather than checking if the comparison is False or if it’s Null, I can use the Nz function to convert a Null value to False, so that the comparisons only need to be done once:

View all posts by Doug Steele →
This entry was posted in Queries. Bookmark the permalink.
Click here to cancel reply.