There are things ADO can do that no other data access method can. Among the coolest features is persistent datasets. In this article, one of the gurus of ADO shows you how to use this technology in your Access applications.

As an Access developer, by now you must have heard about ActiveX Data Objects (ADO). So, now that you’re getting familiar with ADO, I can give you a look at one of ADO’s advanced features: persistent recordsets. If you’re not an Access 2000 user, you’ll need to download ADO from the Microsoft Web site (see the sidebar, “Getting ADO”).

Saving a recordset to disk in ADO is very easy. All you have to do is use the Save method of the ADO Recordset object. The syntax looks like this:

In the Filename argument, you specify a valid path to output the data to. With the FileType argument, you specify what type of file format to save your recordset to. There’s only one valid file type in ADO 2.0: Table Datagram. You specify this file type with the predefined constant, adPersistADTG. With ADO 2.1, you also have the ability to save a recordset in XML format using adPersistXML (ADO 2.1 ships with IE 5.0, Office 2000, and Windows 2000).

I’ll demonstrate this feature of ADO with a complete code example that opens a recordset based on the Shippers table in Northwind and saves it to disk. Before saving a recordset to disk, you have to create a recordset. This code creates a Connection object for the database Saccess.MDB, using the OLE DB provider for Access (OLE DB is the technology underlying ADO):

Now that the recordset is created, I can save its contents to the file Saccess.DAT with this code (after first deleting any previous versions of the file):

To open the recordset from disk, all you have to do is use the Open method of a Recordset object. Instead of specifying a SQL statement to load your recordset, you just specify the name of the file you want to open as the command you pass to the Open method. You must also tell ADO that the command you’re passing is a filename by using the Options parameter of the method:

In the following code, I’ll show how to load a recordset from disk and iterate through its contents, filling a string with values to populate a list box. This technique can come in handy if you’re in a client/server environment and want to fill some list boxes with data from the server. If the data doesn’t change that often, you can have an application that runs every night, deletes the old saved recordset on disk, and then replaces it with a new updated one. Throughout the following day, your Access application can read the saved recordset and fill list and combo boxes, or even local tables, without having to connect to the server, saving a lot of time.

This code re-opens the recordset that I created in the previous example:

With the recordset open, you can iterate through the recordset exactly as if it had been created from a database, loading the data into a string with each value separated by a semi-colon:

The real power of persisted recordsets is that you have to ability to take the saved recordset and work with it offline. When you’re done with the recordset, you can send your changes back to the computer with the database to be re-synced with the data. In the following code, I’ll save the Orders table of Northwind database to disk:

Now that I have the Orders table saved to disk, I can e-mail it to someone who has to work with it offline, disconnected from the corporate LAN. When my partner gets the file, the recordset can be used in an unbound form in Access to look at the data and modify it. Figure 1 shows the unbound Access form used to perform this task. 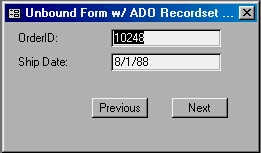 The way the unbound form works is by declaring a module-level ADO recordset variable called rst. I then create the recordset object on the form’s load event as shown in the following code, loading it with data from the persisted file. After I load the recordset into memory from disk, I fill the text boxes with the data from the current record in the recordset. Here’s the code:

I’ve chosen to retrieve the data into an Access form for simplicity in the demo. However, since ADO is a COM library that can be called from any COM-compliant language, I could have used a Visual Basic form, or even a Web page. In addition, with ADO 2.1, I could have saved the recordset to XML format. XML increases the flexibility of the recordset, since there are XML processors for many different types of systems, including Mac, UNIX, Linux, and Windows (see Michael Corning’s article on XML, “Access to XML,” in the March 1999 issue for more information). Further, in Access 2000, the process of binding the form to the recordset would be even simpler since I’d only have to set the form’s Recordset property to the recordset that I created from the file.

After all of the changes have been made in my unbound form, my partner can send the persisted dataset back to me. When I receive the file, I can re-sync the data. Re-syncing is a simple three-step process:

1. Open the recordset from the disk.

2. Set the recordset’s ActiveConnection property to a valid connection object.

The UpdateBatch method will update the records from the recordset back to the database.

Once the UpdateBatch method completes, you should loop through the recordset to check the status of each record and determine whether the record was re-synced successfully or not. Records will fail to re-sync if the record was deleted or updated since the recordset was saved to disk.

To check the status of a record’s re-sync, you first must filter the recordset to see only the affected records. You can use the recordset’s Filter method like this:

In this loop, you can perform as much error handling as you want. This can include your own custom conflict resolution code, since each field in each record will make available both the original value and your updated value. Figure 2 shows all of the Status codes that are available, as seen in the Object Browser. 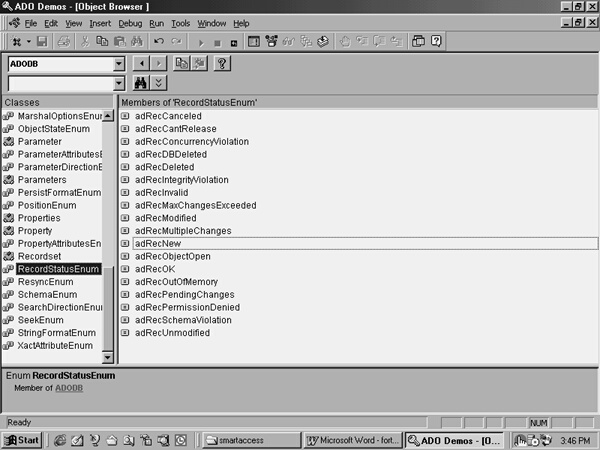 Here’s some code that will re-sync a recordset with a database and loop through the recordset after the re-sync to display the OrderID and the Status code of each record:

ADO is Microsoft’s long-term replacement for DAO. Like DAO, ADO provides an object-oriented way to retrieve data, organized around the Recordset object. While offering a simpler object model compared to DAO, ADO also offers some features that DAO doesn’t have.

If you don’t have ADO installed on your machine, you’ll have to download it from the Microsoft Web site at http://www.microsoft.com/data. In order to use ADO in your Access 97 or 95 applications, you’ll have to set a reference to ADO by opening up a module and selecting Tools | References from the main menu. Once you have the References dialog box open, you’ll need to set a reference to “Microsoft ActiveX Data Object 2.0,” and you’re ready to go. You must have ADO 2.0 installed to use persistent recordsets (you Access 2000 users can skip this step).