Treeviews are a common (and powerful) tool for creating Windows User Interfaces. Unfortunately, developing with the Treeview control is neither intuitive, nor easy. Doug Den Hoed provides a module that you can reuse to quickly add rich Treeview functionality to your own applications, including a form that your users can play with to create their own Treeviews on the fly!

A few years ago, one of my clients convinced me that a Treeview was the best way to display their data. I resisted using the control, mostly because of my ignorance about how Treeviews worked. I only knew that they were very different from the other types of controls I’d used within Access, and that the learning curve was steep. But learning the control turned out to be the worth the effort: my client loved the results.

Over time, I generalized my solution into a library database (TreeLib.MDB), which I now use to quickly add Treeview functionality to other projects, without having to relearn everything. In fact, I even built a form (frmTreeviewBuilder) that lets users create their own Treeviews on the fly (you can see that form in Figure 1 and the data behind it in Figure 2). 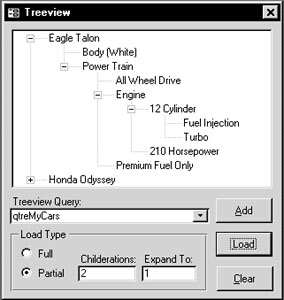 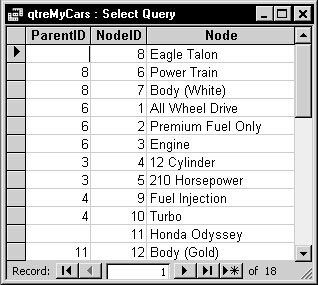 When a user opens my frmTreeviewBuilder form, the top portion of the form displays an empty Treeview control. Users then select the query that they want to view from the combo box on the form, choose either Full or Partial Load Type, set the Childerations and Expand To values (if applicable), and click the Load button, which loads the Treeview and displays the root level of data. On the form, the Load Type determines how deeply the code populates the Treeview. For large sets of dynamic data, the Partial option causes the Treeview to display its initial screen sooner (I’ll assume Full when describing how my code works).

The combo box pulls its data from Access’s system object table, displaying all queries (MSysObjects.Type = 5) whose names are prefixed with “qtre.” I use “qtre” to flag queries suitable for displaying in a Treeview. The RowSource for the combo box looks like this:

Clicking on the nodes in the Treeview expands and collapses the details underneath the node. When the user is done with their first set of data, they can click the Clear button to empty the display or choose another query to load its data. If none of the queries listed in the combo box are the one that the user wants, clicking the Add button on the form will open Access’s query builder and let the user create the query they need.

The queries that I created to work with frmTreeviewBuilder have three columns called Node, NodeID, and ParentID. For each record in the query’s Recordset, the Node field contains the text that displays in the Treeview (for example, Eagle Talon), the NodeID field contains a key value for that Node (for instance, the Power Train row has a NodeID of 8), and the ParentID field contains a reference to the parent record. At least one row must contain either a null or vbNullString value in the ParentID column: This designates the record as “root level” data. All other rows must have in their ParentID field the NodeID of the node they belong under (for example, Power Train is a child of Eagle Talon, so its ParentID is set to 8). The query that I used for the display in Figure 1, looks like this:

The work of converting the query data into Treeview nodes is done by the treTreeviewFill routine. For each row in the qtreQuery, the code creates a node. The routine then calls itself (a “recursive” call), looking for other rows in the qtreQuery that belong to the current row (that is, rows with whose ParentID contains the same value as the current row’s NodeID). For each child it finds, the routine finds and creates that child’s children. When the routine finally gets to a child with no children, it moves back up a level to do the next child at the previous level, until there are no children there either, and then moves up again, and so on. Eventually, the routine will return to the row it started with and move to the following row. As you might have guessed, as the code moves through the Recordset, it will eventually hit a row that is a child of an earlier row and so has already been created as a node. In that case, the routine skips to the next row.

On top of all of this brute force effort, you’ll normally want the Treeview to keep the Nodes sorted alphabetically so it’s easier to find any particular node. That takes even more overhead, especially because the results from qtreQuery might not be sorted in a useful way. In my example, the load of the Treelib would have processed the records in this order: 8, 6, 1, 2, 3, 4, 9, 10, 5, 7, 11, skip 1^10 (already loaded, 12 With all of that skipping around in the Recordset, the order that the records were retrieved isn’t much help to the order of the records in the Treeview. It’s easy to imagine that increasing the data volume quickly degrades a Treeview’s load performance.

Although they’re variable, I believe that my default values of Childerations = 2 and Expand To = 1 are optimal. Take another look at Figure 1 to see why. Expand To = 1 means that the Treeview will display only the root level when it first loads, and then expand one level of children per node click. By looking one Childeration deep, the code discovers whether the current node has children, and can decide whether to display a plus sign (+) beside the node as a visual indicator to the user that the node has children. By going two Childerations deep, the code has already loaded every node that the user might click, speeding up the user’s next expansion.

So it’s a trade off. The more data you load initially, the quicker the Treeview responds as you click it, but the longer it takes to load. I encourage you to experiment to decide what works best for your data. I should also mention that collapsing and then reexpanding a Partial Load Type Treeview will actually refresh the data as it’s redisplayed. That’s helpful when the data keeps changing.

Grow your own Treeview 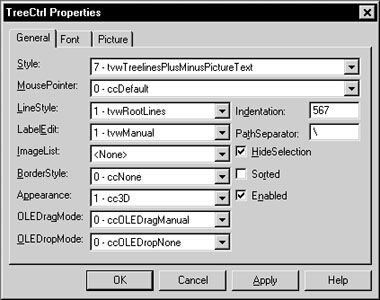 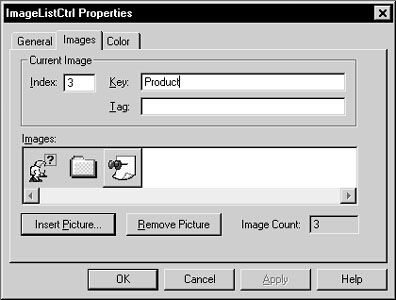 I use the code from TreeLib.MDB (in the accompanying Download file) behind the custom Treeview controls that I put on my forms. I also dress my Treeviews up with icons using the ImageList control, which is in comctl32.ocx. Here are the steps that I followed when I built the sample form frmCustomerOrderProduct in TreeLib.MDB, excluding some theft of NWind.mdb data:

I set Me.Visible = True so users can watch and expand objTreeview while it populates, thanks to a DoEvents command in the treLibrary code that lets the Form repaint itself. I deleted some data from the Northwind tables that I borrowed in order to speed things up. In your application, you might want to filter the query with input from a form. With your Treeview loaded, you can add code to the Treeview’s Node_Click event to perform some action when the node is displayed: open frmCustomer, frmOrder, and frmProduct, for instance, depending on the node type. Get creative!

I built four queries to support objTreeview: qselCustomer, qselOrder, qselProduct, and qselCustomerOrderProduct. I forced ParentID to be a zero length string in qselCustomer, which causes my code to treat each Customer as a root node. The ParentIDs in qselOrder contain NodeIDs from qselCustomer, making each qselOrder row a child node of a qselCustomer record. Similarly, qselProduct ParentIDs relate to qselOrder NodeIDs. Each qselQuery includes a column called Image, where I store the appropriate ImageList Key for that entity.

The qselCustomerOrderProduct query that’s the basis for the Treeview is a Union of the three queries. Remember that the relationships between the records is established by the NodeIDs and ParentIDs. As a result, using a Join to tie the records together is unnecessary. To avoid the possibility of confusing which entity a NodeID or ParentID refers to, I prefixed each NodeID and ParentID with a tag to represent the proper entity (for example, “cust,” “ordr,” and “prod”). I didn’t bother with an Order By, either—the Treeview handles that.

There’s still more functionality in TreeLib.MDB. In the previous section, I used only the first two of 16 parameters that you can pass to treTreeviewFill. To really exploit my treLibrary, consider trying some of these options. Table 1 lists the all of the parameters and what they do.

Table 1. All of the treTreeviewLoad options.

The comctl32.ocx Treeview control is a powerful interface that users love to use, but developers hesitate to confront. My treLibrary, frmTreeviewBuilder, and examples let you easily tap into its features. I invite you to use TreeLib.MDB to offer users Treeviews on-the-fly, custom Treeviews with icons, and duplicate branching. And, once you know how it works—Improve it! Share it!

Finally, build a couple of example qtreQueries using the conventions I described and test them with frmTreeviewBuilder. Usually, I draw my hierarchical data from four different kinds of tables: tables with self-joins, like “tblCompanyPeckingOrder”; utility tables like “tblMyAppNavigation”; system tables like “MSysObjects” (which I’ve provided as another example); or from a set of related tables like “tblCustomer, tblOrder, tblOrderDetail.” In the latter case, I make my qtreQuery Union the tables together, and prefix the NodeID’s of each with a tag to make them unique (for example, cst1, odr1, dtl1). Also, I use the Nz() function to make sure my root queries return a vbNullString rather than Null to match the “string” datatype of my concatenated NodeID’s (that is, “cst1,” rather than 1).

As long as you follow the qtre conventions and choose the Load Type prudently, frmTreeviewBuilder will be enough to satisfy your Treeview needs.

Doug is VP of Product Development for PEPR Inc, a Director at Lumina Consulting Ltd, and is transforming the way Oil & Gas companies do business with another new venture he initiated. He still enjoys working with Access.
View all posts by Doug Den Hoed →
This entry was posted in Other Topics. Bookmark the permalink.
Click here to cancel reply.