Dave Gannon provides three neat tricks that you can use on your next form– provided you’’re familiar with the properties of the Access list box.

I like list boxes and find them tremendously useful. In this article, I’’ll show you three tricks that I’ve recently used with list boxes. All three of them demonstrate some of the ways that you can use the properties that are unique to the list box control. These only work in Access –while Visual Basic has a list box control, it lacks some of the properties that I’ll be demonstrating in this piece.

For instance, I was recently asked for a list box that would automatically find an item in a text box on the same form (see Figure 1). The user wanted to be able to type a name in a text box and also be able to select one or more names from a list. When the user entered the name in the text box, they wanted the corresponding name to be automatically selected in the list box. The functionality is very similar to a combo box with one important exception: It’s a lot easier to give a user the ability to multi-select with a list box than it is with a combo box. 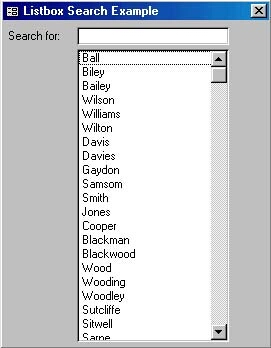 My answer uses the KeyPress event of the text box to tie the text box and the list box together. When the user enters a character into the text box, the code in the KeyPress event searches the list box for a match. The code builds a string by adding valid characters (“a” to “z”) to a string as the user types them in. If the user presses the backspace key (ASCII code 8), the routine removes letters from the end of the string. After each keystroke, the code calls the CheckListbox routine, passing the current value of the string. In this example, I used the form’s Open event to initialize the string, but you could also use the text box’s GotFocus event:

The CheckListbox routine accepts the passed string and uses the Len function to find out how many characters it contains. The routine then uses a For…Next loop to find and set the entry in the list box whose first characters match as much of the string as has been entered:

By the way, if the user enters a string that doesn’t match any of the entries, I select the item at the bottom of the list box. You might want to handle the situation differently.

This was a quickie solution that I knocked off in answer to a request by one of our developers. The developer wanted a function that would provide a sum of one or more of the columns in a multicolumn list box (see Figure 2). 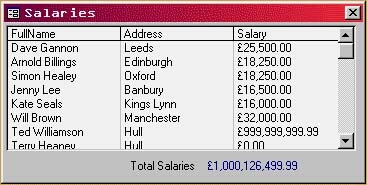 My solution was straightforward. First, I put a text box on the form to display the sum of one of the columns in the list box. I then created a function called SumListBox that–when passed the form name, list box name, and a column number–would return the sum of the values in the column.

After declaring its variables, the routine begins by getting references to the form and list box and checking to make sure that the column exists. If they aren’t found, the routine sets the text box to an appropriate error message and exits:

Now that I know that everything is present, I initialize a variable and loop through the list box’s Column property, adding the values in the specified column. The Column property of the list box accepts two parameters: The first one specifies which column to use, and the second parameter specifies which row is to be used. The Column property numbers the columns from 0, so the second column in the list box is column number 1. Rather than force the routine’s user to perform those mental gymnastics, I subtract one from the column number passed to the routine before using it. That way the developer who wants to add up the second column can just pass my routine the number 2:

The SumListBox function can be called from anywhere, but the developer that I wrote it for called it from the text box’s ControlSource property. To add the salaries in column four of a list box called lstSalaries, the ControlSource property would contain this code (the [Name] parameter picks up the name of the current form):

Since a Visual Basic list box can’t be multi-column, it doesn’t have a Column property and couldn’t run this code.

Search by the second column

This trick allows you to show one set of data, but search on another set. I wrote the routine for a list box that displayed customer last and first names, along with their addresses. The user wanted to be able to press the letter “b” and move to the first customer whose last name began with that letter. Once the user was there, they wanted successive presses of the letter “b” to move them through all the entries that began with that letter.

The list box’s RowSource is set to a query based on the Persons table. This query retrieves four columns: